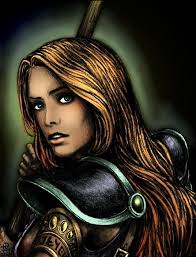 I tugged the reins, steering my horse for the side passage, ready to spur us into an escape.

Shinvar jumped down from her mount and sprang for the train. Down in the gullet of the earth the battle-thirsty roars of Orkans were joined by a ragged chorus of snarls. Wild and bestial, they chewed the dark to shreds like dogs fighting over an old slipper.

“We will!” Shinvar ran the line of carts, wrenching handbrakes. She was a blur of motion in shadow, but I heard the clank of levers, one after another. “Just as soon!” she called out. The lead – or end – cart squeaked into rusty life, drawn towards the depths. “As we’ve sent them a parting gift!” Shinvar unlocked a sixth lever, then disappeared between carts. Quieter clinks and clanks played percussion while the snarls and roars built from below.

Untended, Shinvar’s steed stamped and snorted. My own horse stirred, growing twitchy beneath me. I muttered calming syllables to the animal, but it was like singing a soft lullaby in a thunderstorm.

Shinvar sprinted back out of the dark. She pushed her shoulder to the lead cart, which inched along the track, tugging at the rest of the train like a leaden snake pulling at its lethargic body.

“What’re you waiting for? Come give me a hand!”

Under the snarls and roars, the beat of hooves and the drum of steel and leather boots heralded the approach of a small army. No doubt the numbers were multiplied by the dark echoes. But there were more than I cared to face.

“Of course!” I leaped from my saddle as though jolted from a bad dream. Darting around the cart, I pressed my shoulder to its bulk and leaned in from the other side. Its stubborn wheels groaned, but the gravity and darkness coaxed and pulled.

Somewhere amid the mechanical creaks and clanks and my own straining groans, the slope took over. The cart trundled on and our pushes were redundant.

I dodged clear, stumbled back against the tunnel wall. I rested there, regaining my breath, watched the unfettered carts gather pace for the long dive into the hollow gloom. The last of six carts passed me by and I stood, hopped across the tracks to rejoin Shinvar. Who was already mounting her horse. I climbed into my saddle and in the next second we rode. Away and up the escape tunnel.

Behind us, the rising rumble and clatter of our loosed mining train filled the mountain. Returning the cargo of stolen riches to the deepest vaults of the earth. And, I hoped, to those who had chosen to lurk there in hiding.

We dared not gallop in the dark. One misplaced hoof-fall and we would be the ones to crash. But we tested our nerve with a dangerous pace. Our world became a rushing funnel of shadow and noise.

The staccato-clack of hooves pummelling the stone ground. The frenetic rattle and thunder of the train like a steel drum rolling downhill into the Netherplanes. The riotous roars and shouts of beasts and Orkans surging forth to meet the train.

This mangled symphony ballooned in volume, too big for the venue. Din filled the caverns then hammered its way into my skull. Until all I heard were the warring breaths of my mount and myself. And even those merged and rushed in my ears like a single crashing waterfall. And my thoughts plunged with the sound, seized by a strange vertigo. But my heart did not clench in fear, but swelled with exhilaration.

And then there was silence. Not silence as such, for it was punctuated with more patient hoofbeats. A relative stillness, as Shinvar slowed us to a steadier rhythm.

Between the clips and clops, she listened. Despite the gloom, I could see her do so. From the keen tilt of her head and her own stillness in the saddle. And I did the same.

Odd sounds reached me: distant mumbles, sour murmurs and perhaps a disgruntled animal growl or several. But they could easily have been remnant echoes trapped in my ears. Or imagined whispers from these old shafts, the sort of random musics conjured by darkness and a mind alert for trouble.

“They’re following,” Shinvar assured me, her tone firm but hushed like cushioned iron. “We’ve delayed them. Encouraged them to be cautious. That’s something. But we’ll have to shake them off or deal with them altogether before we reach the Elves.”

I nodded. Then realised my gestures might not be so emphatic in the dark. “Absolutely. Set our tactics and I will follow your command.”

“Mm hmm.” A pause stretched with the tunnel. “Only, next time, don’t hesitate.”

Her words were edged with unexpected rebuke. They cut deep.