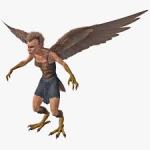 This is the world that rushes to meet me. There in my first blink my vision is assaulted and overwhelmed. Senses reel like the sky above. It’s all a bit dizzy-making and yet, through the confusion, I understand my purpose.

The ugly ones, I’m thinking, are the bad guys. Also, they smell bad. They snort and growl as they swing their axes and mist the forest with the stench of clogged drainpipes. Mulch and dead things lodged in their porcine nostrils or stuck between their gnarled ebony tusks.

I swoop like a winged bolt at their chieftain. At least, I presume his feather-and-mammoth-hair crested helmet signifies leadership status.

Unimportant. Details, details. Push them to the back of my mind as I dive at his squinty pig-eyes and dig in with my talons.

He squeals and stamps about, flails with his battleaxe and buries its blade in the shoulder of his nearest comrade.

I flap away, climb and spin. Seeking out my next target.

Below, my allies press their attack.

Their captain, a warrior, all cut and thrust and long black hair. His sword razors through the chaos of foes, unleashes a fountain of enemy blood on his black leathers and shiny breastplate. The spray shares itself freely. Left, speckling the gladiator. Bronze-skinned and bronze-helmed, he twirls a spear like a parade baton, casts a net and drives the speartip deep into his struggling catch. The spray splatters right too, showering the Merman, with his seaweed beard and fishscale armour. He lifts a flailing, squealing foe on the prongs of his trident.

Behind them, safe from the blood and gore, a purple-coated gentleman dances and reels and gambols. A bard, surprisingly spry for a man of such well-wintered hair, he pulls on the strings of his lute like many triggers on one gun, firing discordant musics into the enemy ranks. Disoriented, they swing their weapons to this anti-rhythm, their strikes missing by similar margins to the notes.

And there, to the very rear of this party of heroes, stands the druid. My master. I know him without knowing his name. There is a bond between us, invisible like the force between archer’s bow and loosed arrow. I am anchored somehow to this man’s will. Propelled on a wave of his thoughts. This unassuming mouse-haired youth with no colour to his cheeks and a chin that has sown some seeds of a beard.

There, he directs me. My next target.

I whirl. I dive. I screech. It is a shrill, drilling sound, strikes the enemy full in the faces like a storm of panic. So I do it again. To lesser effect this second time, but still enjoyable.

I rip into their midst. I am a rag in a violent wind, fringed with claws. I peck and snap and bite. Sink my fangs into an exposed snout. Taste fatty blood before I flap aside. My bite victim drops his axe to clasp two gauntleted paws over his bleeding proboscis. I leave him to his pains and my allies and flit to my next target.

The order is a ferocious roar. I search about for the roarer, but it doesn’t occur that the ‘thing’ is me – until bolt after bolt whistles my way. Flocks of bolts, trying to stab and peck me out of the air. I dance and dip and dodge. To the disordered beat of the bard’s tuneless tune. I screech.

And dive into the attack.

At the crossbows. At the pig-visaged crossbowyers reloading their weapons.

My friends – my allies – chop and charge and forge their way through the front ranks. Carving a path through armoured meat. Fat fingers fumble at crossbows but two – three – swing weapons up and let fly. Here they come! Dip, dodge!

A barbed bolt clips my right wing. My dive breaks into a spin. The world turns. Fast.

I fall. Tumble into the thick of the enemy. I scratch and claw. I lash out and dig in with talons. Blades and fists slash at me. I sink in a crush of enemies, all fighting for a final, fatal handhold around my throat.

Trident prongs jut through a nearby chest. The enemy buckles backwards, grasping uselessly. A net snares another two, drags them clear of me. A longsword chops at legs, fells two enemies like fat trees.

My friends, my allies. To my rescue.

I drop to the ground. Land on my feet.

I preen. Test my wounded wing with my tongue. It’s not mortal. I will live.

I look up, searching for my master.

No green. No blue. Darkness.

“What in seven hells was that thing?” grouched Hamilkar. He couldn’t help it. His gravel-lined throat made his every utterance sound grouchy.

“Impeagle?” asked Mistlethwaite, perhaps wondering how to fit that into his ballad of this minor battle.

“Not bad. Bought us a distraction or two anyway.” Hamilkar snatched up a clump of grass and wiped his sword. He stooped to search the corpse of the Chieftain. “Anyway, chalk up another win for the good guys. One more dead tyrant.”

Thank heavens, he thought, for us good guys. And wished he could clear his conscience as easily as Hamilkar cleaned his blade.

Next time he summoned an Imp-Eagle – or any creature – he promised himself he would at least give it a name.